"Then he just drove away." 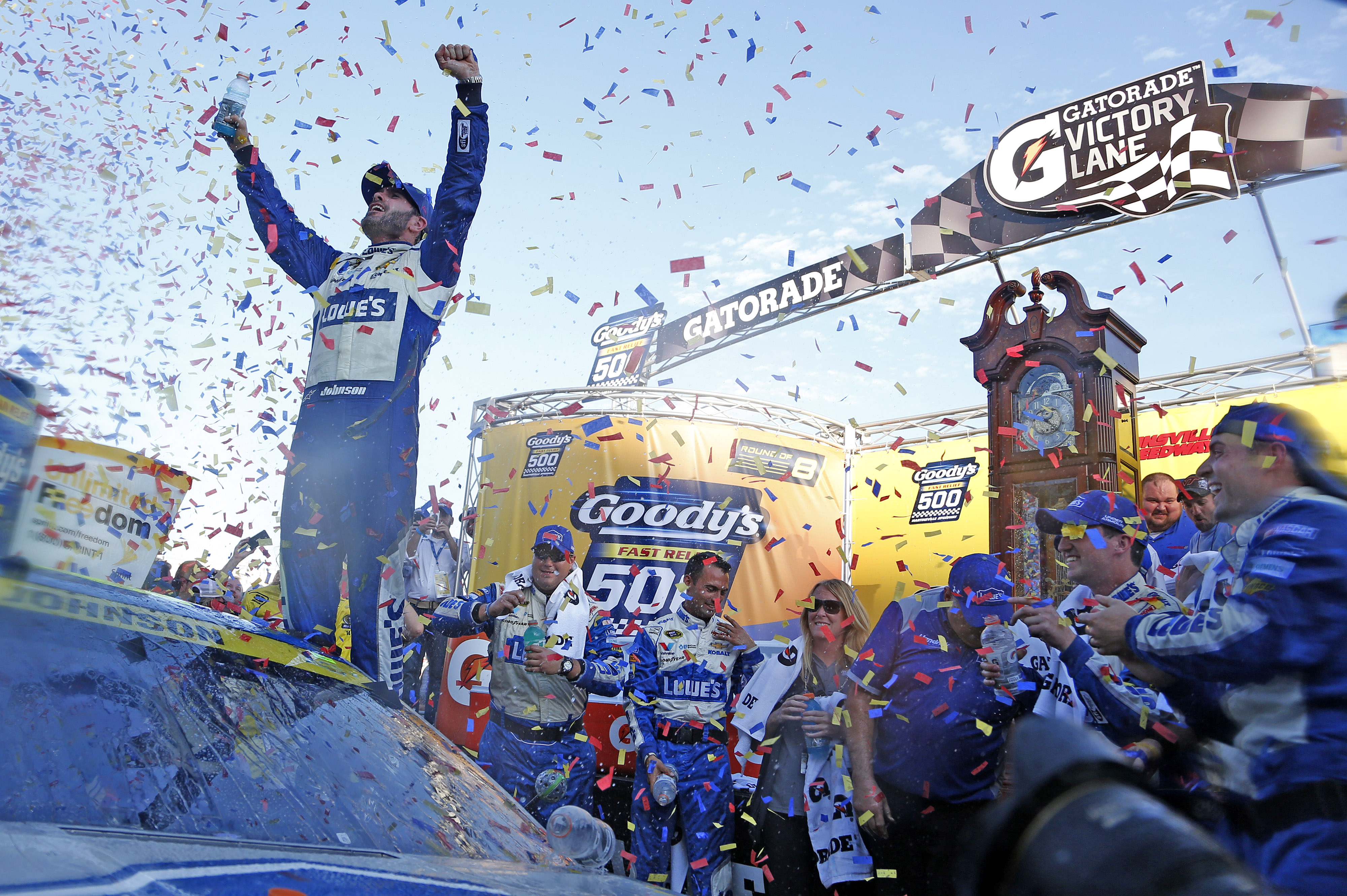 It’s real now. The drive for a record tying seventh NASCAR Championship is more real than it’s ever been for Jimmie Johnson and his Team Lowe’s Racing crew. In capturing his series leading ninth Martinsville win, the six-time champion earned the right to race into Homestead Miami with the opportunity to win #se7en.

Since 2013 when Johnson and crew left Homestead with their sixth championship, it has been a hard fought road to get back there to run for number seven. Johnson noted their race Sunday in Martinsville embodied that same never give up attitude that the No. 48 has become so well known for. “There were a lot of moments but anything in life you have to work for it. It’s not going to come easy and we knew that coming into this race. There are so many challenges with this track. I’m so thankful for this race team.” 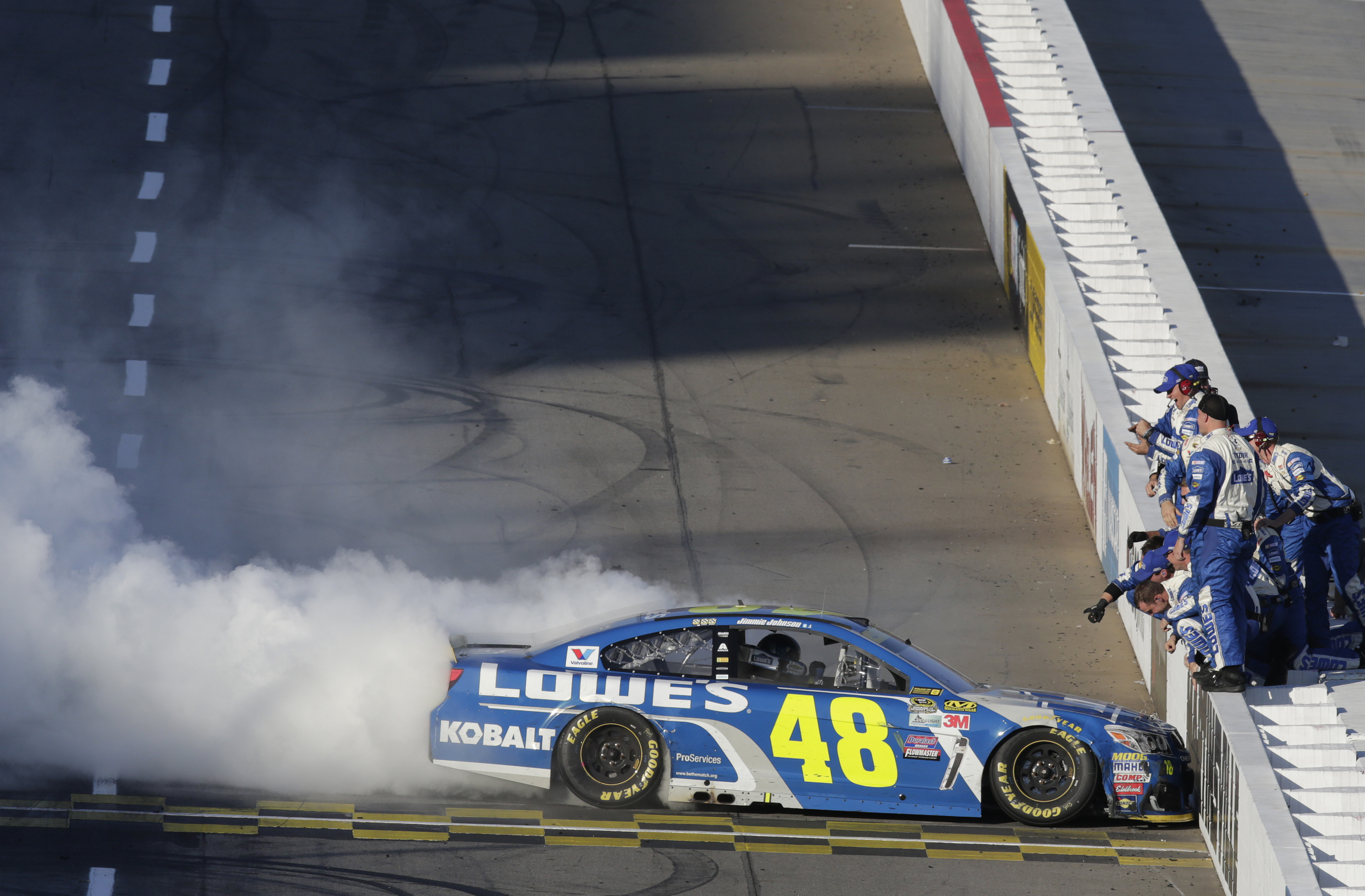 Those “moments” that Johnson spoke of in victory lane began early in the race, which was the hottest race at the Virginia short track since 2006; the hottest fall race since 1999. Friday was a happy day for the team as Johnson qualified on the inside of the second row. Holding station in third until the first caution, Johnson steered away from pit lane and restarted runner up on lap 29. As the run went on, the fresh tires of his competitors shuffled Johnson outside the top ten.

On lap 200 Johnson was fighting for the top five when the No. 11 car booted him out of the way and damaged the No. 48 Chevy. Luck fell the No. 48’s way as the caution fell for an unrelated incident and allowed Johnson to make his way to Knaus and crew for repairs under caution. The extended repairs sent Johnson back the 25th, but still on the lead lap. It took less than a hundred laps for Johnson to re-enter the top ten.

With 150 laps to go, green flag pit stops started happening for the first time in four years at the shortest track in NASCAR. Knaus kept the No. 48 on track as other leaders pitted. Then chaos ensued. The caution came out mid-cycle and left Johnson third on track. Suddenly, the No. 48 rolled to a stop on the backstretch under the yellow. As the Lowe’s Chevrolet sat stationary for a number of seconds, the day appeared to be ruined. Then fire miraculously returned to the cylinders of the Chevrolet V8 and the No. 48 was rolling again. Knaus’ directive to pit for fuel was ignored by Johnson, who in the car knew that fuel was not the issue. The decision by Johnson to not enter the closed pit lane kept the hopes of victory alive.

Johnson explained what happened in the media center post-race: “We were definitely sputtering and running out of gas. I don't exactly know what happened, but somehow there's a switch for the ECU. It was off. When I saw the fuel pressure fluctuate and the engine sputtering, I don't know, I was reaching around. I hit the switch and shut the ECU off, which cut the power off to the car. So I came to a stop. In my mind somewhere there was a voice saying, ‘Recycle the power of the car.’ So I shut the main power off, counted to three, which was probably only one second instead of three, turned it back on. In my mind, I am like, ‘All switches on.’ I went through my checklist and saw the most important switch was off. I switched it on, fuel pressure came up, the car fired, off it went. Then it was hopefully pit one or two laps from then. It went five or six. It was really scary, hoping I could maintain solid fuel pressure. But I just kept coasting, shutting the engine off, was able to stretch it.”

With so much of the field trapped at least one lap down, Johnson made his final pit stop under that caution period and miraculously was able to restart fourth on lap 387. With 92 laps to go, he maneuvered the No. 48 into the lead which he never relinquished. 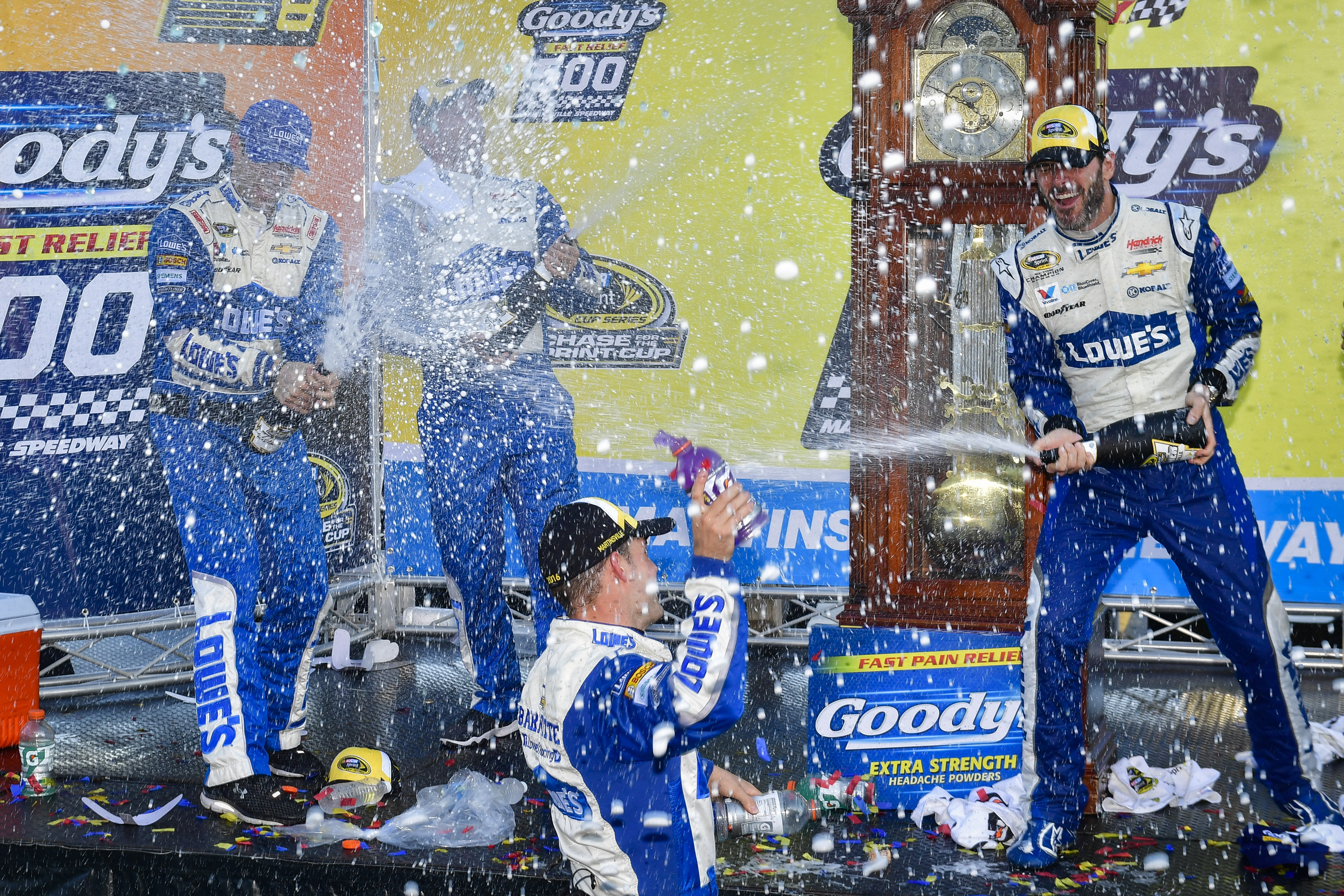 The whole of Hendrick Motorsports has worked their collective tails off to get back to their winning ways after a tumultuous summer, as Jimmie Johnson appreciates: “The turnaround, I'm way impressed with, especially from where we came from to where we've ended up. It's one thing to see progress, but to advance and go back to leading a lot of laps and contending for many wins is very, very impressive. We couldn't have done it on our own. It took all four teams, then it took all the departments at Hendrick. Honestly, it took Rick Hendrick showing his commitment. For him to sit in the wind tunnel for a 24 hour shift with all the teams, his commitment. He couldn't help being in that wind tunnel, but his presence there, the message that sent to the organization. There's other examples like that, as well. He's led by example. We've come a long way in a short period of time, which is really impressive.” 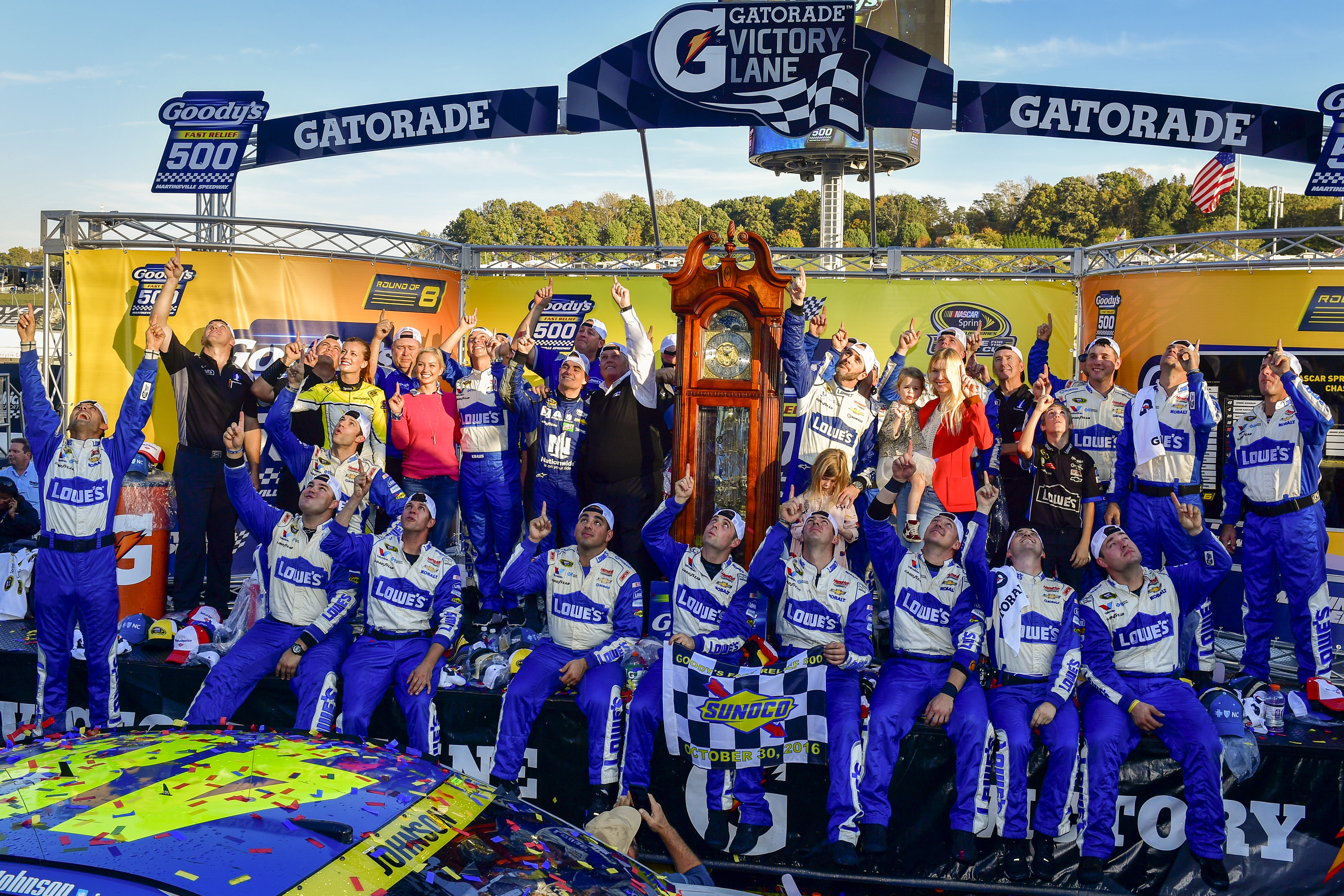 It’s safe to say Mr. Hendrick may have been the proudest person on the property in Martinsville following his team’s 244th Sprint Cup Victory: “It means it takes a lot of pressure off right now, I tell you, just having the win, just like Charlotte, to advance into that round. We're really looking forward to Texas because that's a really good track for Jimmie. But to win here and know we're locked into Homestead, it's a great relief. It's a special race for us. Think this was our 24th clock here, so they told me. I'm pretty excited about that. You know, these guys have worked hard. The whole organization has worked hard. We’re really happy for Lowe’s, for Chevrolet and for the organization. We’ve been so close in a lot of these races. It just feels so good. Now we get to go to Texas, and we like Texas. This place is special. Twelve years ago we lost a lot of our family and friends. We dedicate this one to them. Now we get to go on to Texas and have fun.” 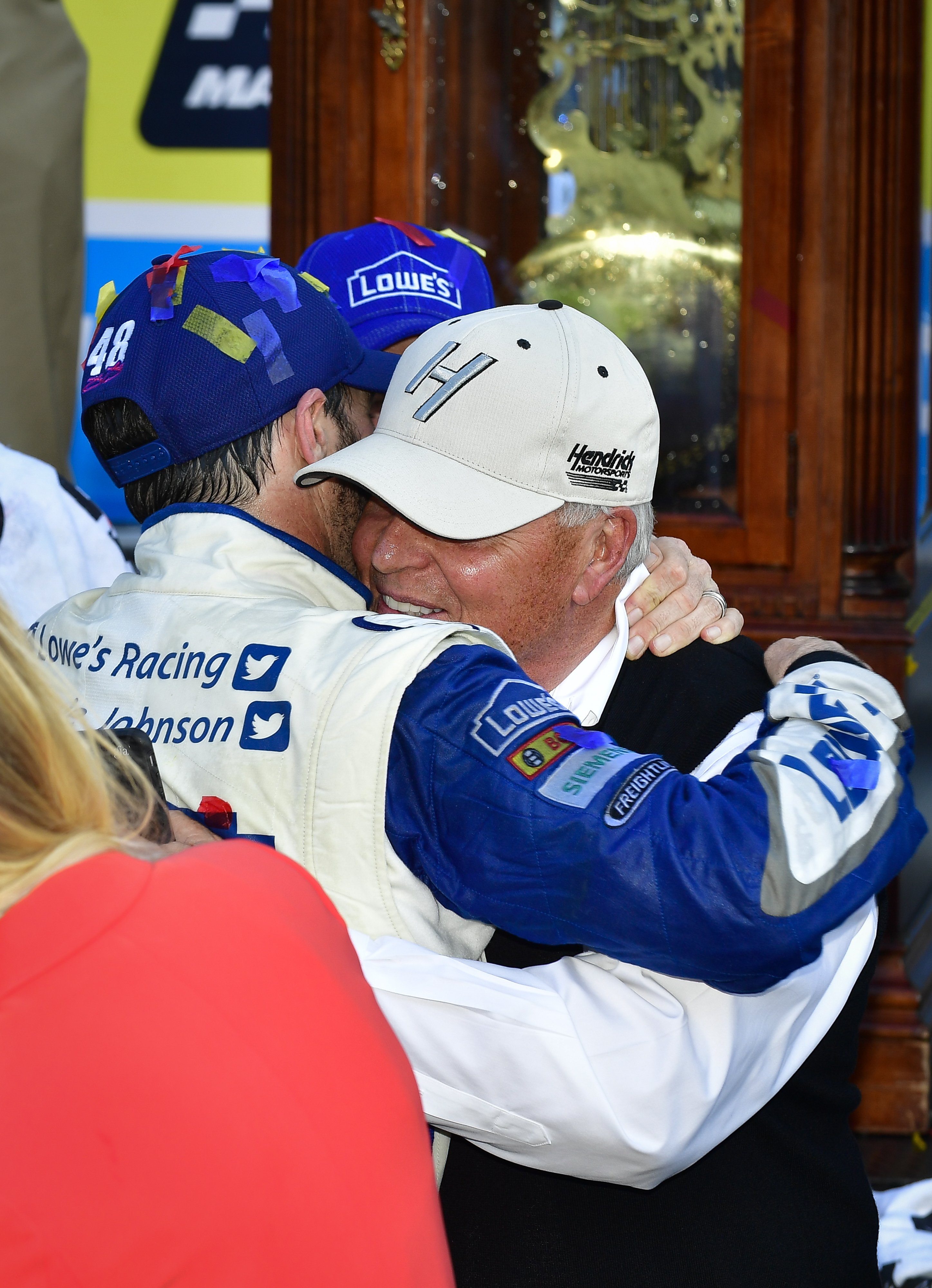 Those friends and family members that were lost on that fateful day twelve years ago always weigh heavy on the mind of Jimmie Johnson as well: “To win on this weekend at this track with the tragedy we had in ’04, we’re thinking of all the loved ones that we lost in the plane crash. We want to thank our family and friends. It’s a great time to start winning races. I mean, gosh, they're all very, very special. To be here in the fall, pay respect to the people that we lost in the plane crash is one aspect when we show up here, to see Rick in Victory Lane, have a few moments talking about little Ricky and his brother and the plane crash, the people on it, there's a moment we take. I'm not sure if others do. It definitely hits something inside of us that lived through that. Then to punch our ticket, know the chance at seven is alive is pretty damn awesome.”

Speaking of seven, Johnson can only play Mr. Cool for so long, and he knows it: “I’ve been trying to ignore this conversation about seven but now I can’t! We’re locked in. I’m just honored to be in this position. I wouldn’t be in this position without the belief of Lowe’s and all their employees had in me back when I was running 10th or 15th in the Busch Series. Rick Hendrick, Jeff Gordon… all of the people who have believed in me to get this point. It’s crazy that we have a shot at seven now. We couldn’t do it without our partners at Chevrolet, Valvoline and the list goes on and on. Thanks to them all very much. I’ll probably lie to all of you guys and say I’m not going to think about it at all. But it’s inevitable. Fortunately, I don’t have to think about it for three weeks. But we’re going to enjoy this and savor it. We’re going to get our ducks in a row for Homestead.” 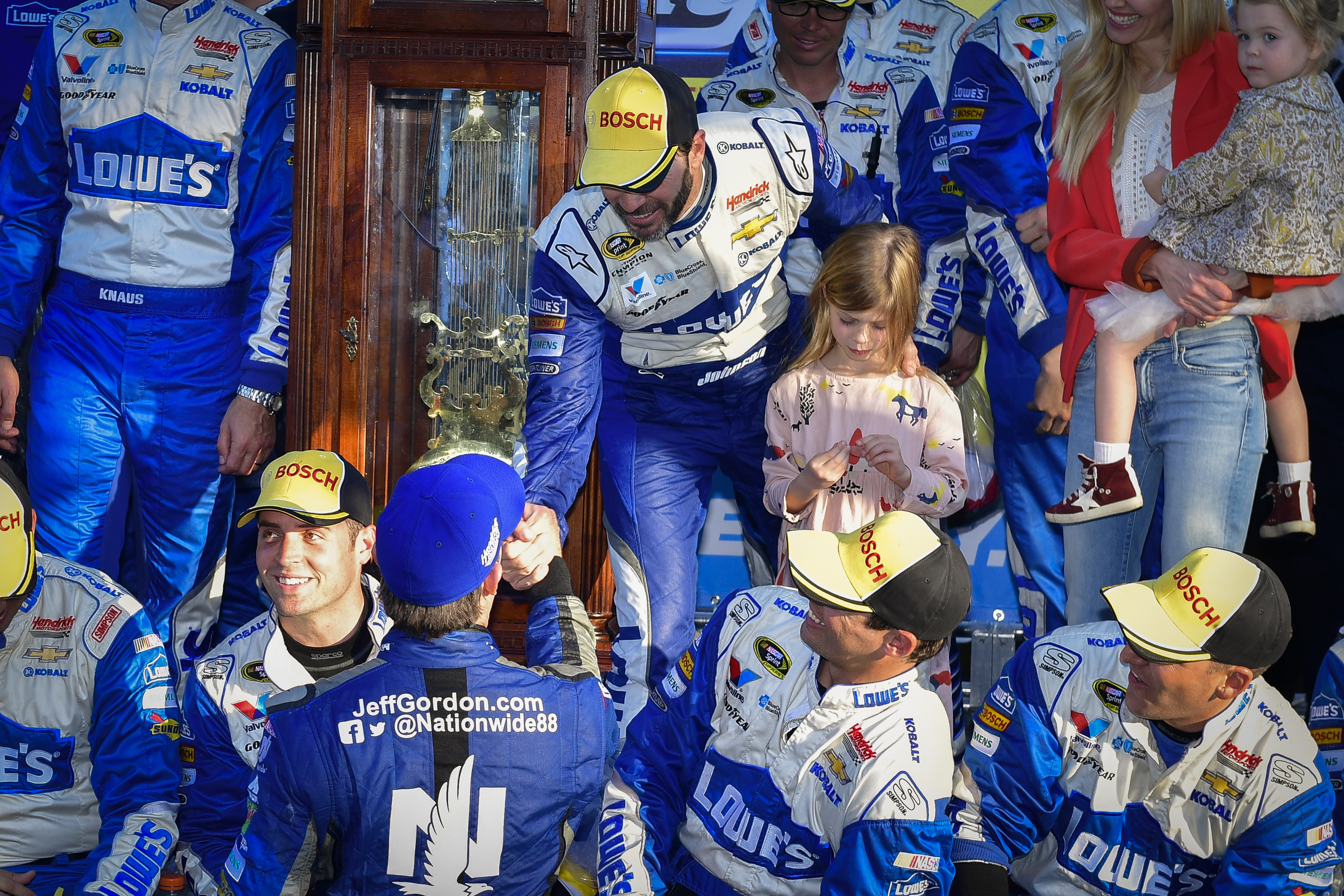 Jimmie mentioned Jeff Gordon, the man who believed in Johnson enough to put his money where his mouth is and to this day is the co-owner of the No. 48. Johnson’s longtime friend and mentor likes what he is seeing from the six-time champ: "When things are on the line and things matter most, Jimmie and that team know how to step it up to another level. They showed that today. He'll be showing that again in Homestead. I was back there in sixth or seventh place just watching him go after the No. 11 car. That was just phenomenal driving and racing. Then he just drove away.”

And that’s just what Jimmie and Team Lowe’s Racing look to do with the rest of the 2016 season: just drive away. 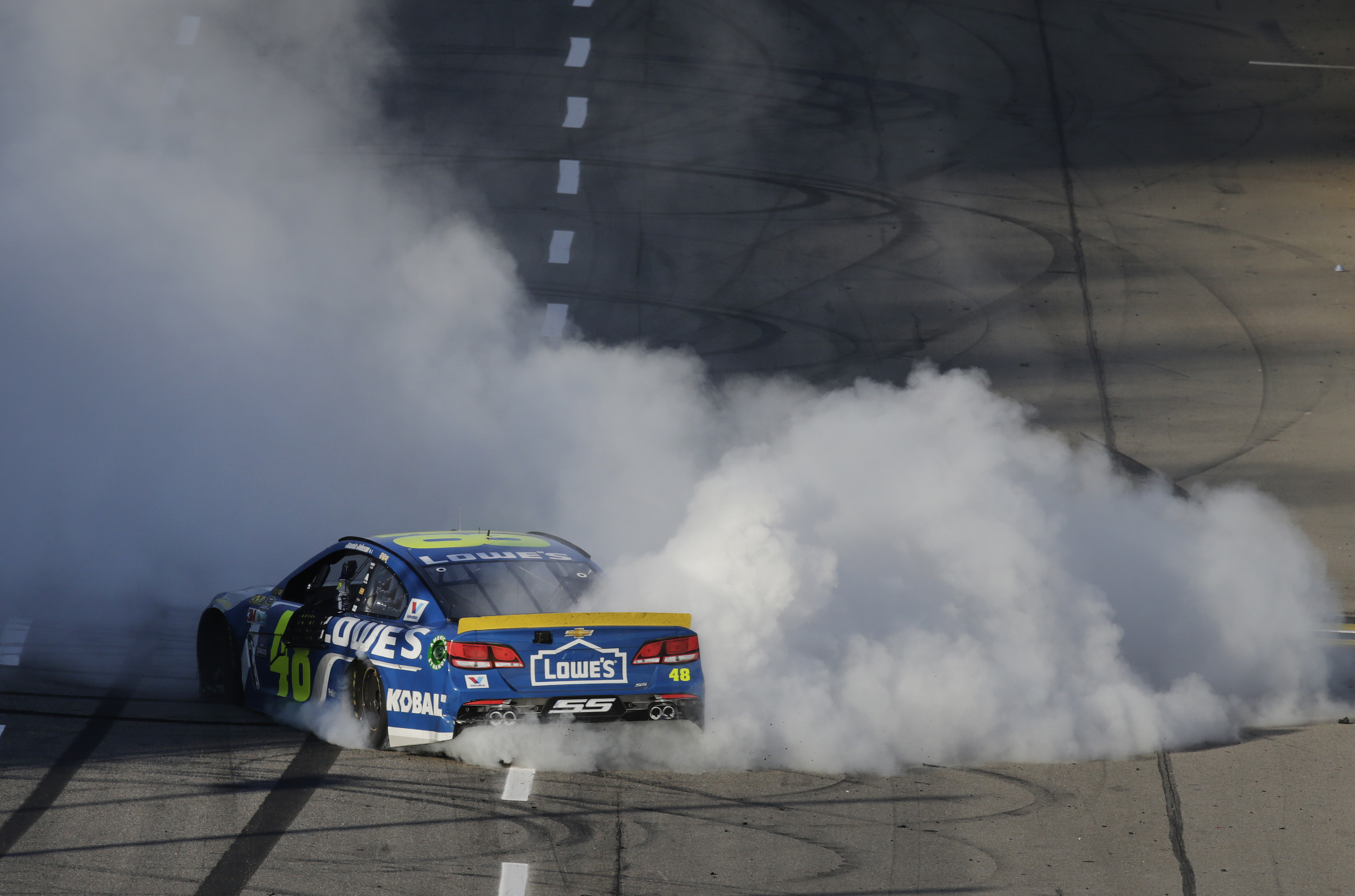