Johnson Guest Stars in Blaze and the Monster Machines 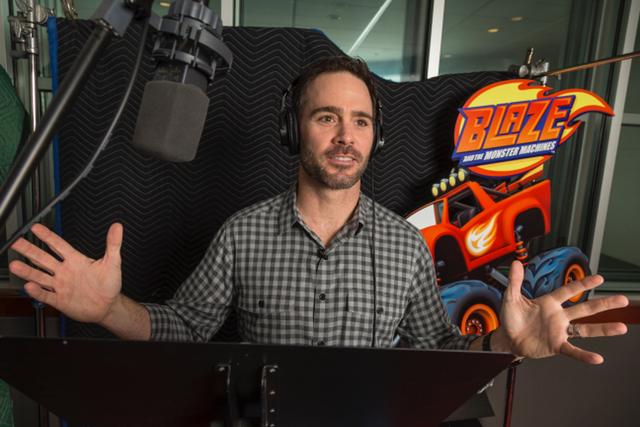 The first special, “Race Car Superstar,” premieres Monday, May 30, at 1:30 p.m. (ET/PT), followed by “Race to Eagle Rock” on Thursday, June 2, at 1:30 p.m. (ET/PT) on Nickelodeon.  The remaining race car episodes will roll out this fall.  Blaze and the Monster Machines follows the adventures of the amazing monster truck Blaze and his eight-year-old driver AJ.  It’s also the first preschool show on TV to comprehensively cover all areas of STEM (Science, Technology, Engineering, Math) in every episode.

In the episodes, Blaze visits the racing town of VelocityVille, where all the cars love to go fast, and meets four new race cars: Rally (Patrick), a race car who is always first to the track and never misses a chance to hit the raceway; Dash (Johnson), a car that is fun, friendly, fast and the ultimate racing buddy for Blaze; Mark Set-Go (Elliott) VelocityVille’s sensational starter who kicks off each racing adventure with rock-star style and a signature rhyme; and Fender (Kahne), a car that rules the raceway, but is excited to share the track with Blaze.

In “Race Car Superstar,” a snooty car named Speedrick traps all the other racers forcing Blaze to transform into a sleek and aerodynamic race car to free his new friends.  Then, in “Race to Eagle Rock,” Blaze brings all of his monster truck pals to VelocityVille for a wild race to the top of Eagle Rock. After they all transform into race cars with supercharged engines, they have to find a way to avoid Crusher’s attempts to slow them down

Be sure to set your DVRs and tune-in live!