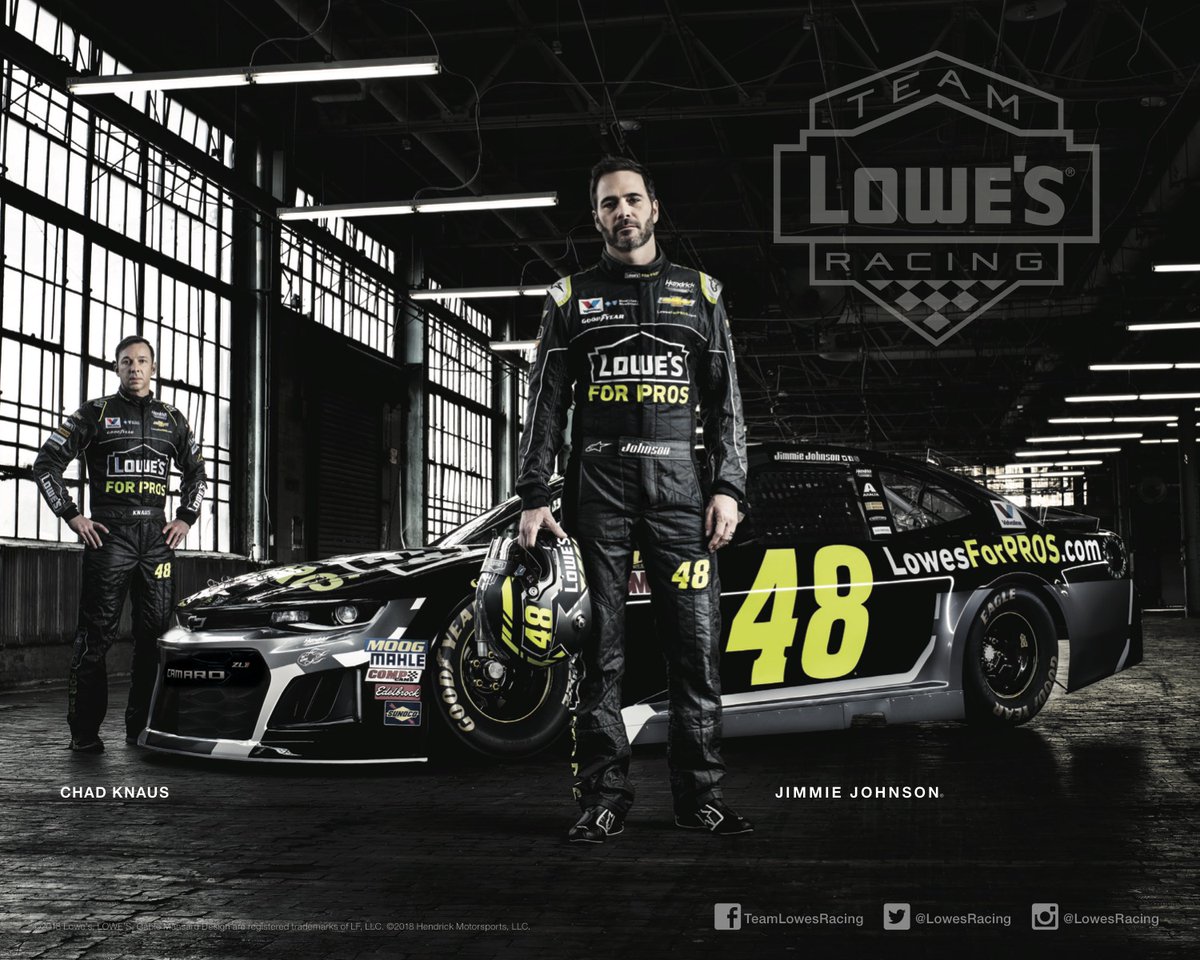 Jimmie Johnson is one of the most accomplished professional athletes of his era. The only race car driver in history to be named Associated Press Male Athlete of the Year, he is a seven-time NASCAR Cup Series champion, sharing the all-time record with stock car racing icons Richard Petty and Dale Earnhardt. He is the author of one of the greatest championship runs ever seen in sports and continues to break new ground with his accomplishments both on and off the track.

With an appeal that extends well beyond racing, Johnson has been supported since 2002 by Lowe's Home Improvement, his one and only primary sponsor for his entire Cup Series career. Hours after winning his sixth championship, Johnson was the first athlete ever to co-host ESPN's flagship news show, "SportsCenter." He has been a guest on "The Tonight Show Starring Jimmy Fallon," "The Late Show with Stephen Colbert," "The Late, Late Show with James Corden," "LIVE with Kelly and Ryan," "The Today Show," "Good Morning America" and "Ellen." Johnson made a cameo on NBC's "Superstore" and was a presenter at the 51st annual Country Music Association Awards. He has appeared as himself numerous times in scripted series, including on Nickelodeon's animated "Bubble Guppies" and as character "Jiminy Johnson" on Disney's "Mickey and the Roadster Racers." In print, he has twice been featured on the cover of Sports Illustrated, along with publications such as Success, Parade and TV Guide. Johnson has been profiled by lifestyle magazines Architectural Digest and Garden and Gun with wife Chandra and in The New York Times style section.

Away from the track, Johnson focuses on his rigorous and well-documented fitness regimen. An avid cyclist, runner and swimmer, he has competed in numerous half marathons and triathlons, including a half Ironman where he placed 15th overall. His attitude toward training and fitness is contagious as he has motivated other drivers, crew members, fans and journalists to embrace health and wellness. Johnson's outside interests have landed him on NBC's coverage of both the Olympics and Tour de France and on the cover of Men's Fitness magazine.

In 2006, the Johnsons launched the Jimmie Johnson Foundation, which is dedicated to helping children, families and communities in need. It focuses on funding K-12 public education, primarily through the Jimmie Johnson Foundation/Lowe's Toolbox for Education Champions Grant program and the annual Helmet of Hope initiative. Grants have been awarded nationwide to hundreds of school projects focused on science and technology, health and fitness programs, trade-based programs, school improvements, language and literary programs, and the arts. The foundation raises funds through an annual golf tournament and a series of special events held throughout the year. To date, more than $11 million has been contributed to various organizations.

Johnson learned the value of giving back through his upbringing. Growing up in working-class El Cajon, California, just outside San Diego, Johnson was a motorcycle prodigy at a very early age. With the support of his family, Johnson's racing career started on 50cc motorcycles at the age of 5. His father Gary worked for a tire company while mother Cathy drove a school bus. With Jimmie and younger brothers Jarit and Jessie in tow, the family spent most weekends camping and doing what they loved - racing on two wheels and dirt up and down the west coast.

At just 8 years old, Johnson won a 60cc class local track championship despite sustaining a severe knee injury with several races remaining and finishing the season in a cast. From motorcycles, Johnson graduated to the Mickey Thompson Entertainment Group Stadium Racing Series, where he had even more success.

A 1993 meeting arranged by Johnson's mentor, supercross champion Rick Johnson (no relation), proved fortuitous. While racing at the Los Angeles Coliseum, Rick introduced Jimmie to Herb Fishel, the executive director of General Motors Racing. The protégé lived up to his billing, impressing Fishel with driving ability and business acumen. Fishel kept his eye on Johnson that year and later helped him land with an off-road racing team.

Johnson seized the opportunity, spending the next few years driving buggies and trucks in off-road stadium and desert races. He also improved his ability to connect with fans and potential sponsors by reporting for ESPN in the Short Course Off-Road Drivers Association Series (SODA). In 1995, the effort paid off in another way as Johnson met future car owners Stan and Randy Herzog while working in the series.

In 1996, Johnson began driving the Herzog brothers' off-road truck. After two years, he was ready for the next opportunity and crafted a proposal for Fishel, who gave the owners and their ambitious driver a shot. In 1998, Johnson climbed behind the wheel of an American Speed Association (ASA) car for his first taste of pavement racing. His ASA victories opened the door for his move to NASCAR.

Johnson had success in the competitive NASCAR Xfinity Series, running a full schedule for the Herzog family from 1998-2001. He racked up 24 top-10 finishes and his first career NASCAR win at Chicagoland Speedway in 2001. But midway through the season he received news that his sponsor would not return and the team would potentially fold. Concerned for his future, Johnson boldly introduced himself to legendary NASCAR champion Jeff Gordon. The conversation would change his life.

Now in his 17th full season in the Cup Series and behind the wheel of a brand new Chevrolet Camaro ZL1 race car, Johnson will continue his quest for a record-breaking eighth title. He is the all-time winningest Cup driver at Dover (11 wins), Charlotte (eight wins), Texas (seven wins), Fontana (six wins), Las Vegas (four wins) and Kansas (three wins, tied with Gordon). He is the only driver to have qualified for the championship-deciding NASCAR Cup Series playoffs every year since its inception in 2004 and has averaged more than five wins per season throughout his career.

Johnson married Chandra Janway in 2004 and is a father to daughters Genevieve Marie and Lydia Norriss. He has a vested interest in art and photography as Chandra owns SOCO Art Gallery in Charlotte, North Carolina, where the family resides. Johnson is also a partner in Charlotte-based restaurant SouthBound, which opened in 2017 and features authentic, made-from-scratch Mexican street food with a Southern California twist. He also has longtime personal relationships with blue-chip brands such as Gatorade and Seiko watches. Johnson is an avid snow skier and enjoys spending time in Colorado and New York City. 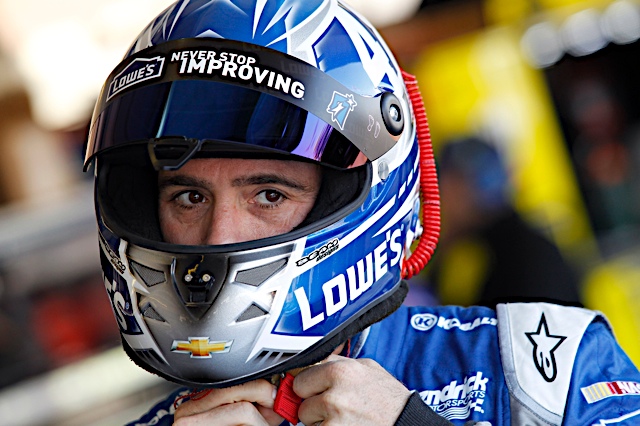 Jimmie Johnson Won for the Fourth Time in the Last Six...

It was an eventful year for Jimmie Johnson.

While Kevin Harvick remains the most dominant driver of the 2015 Sprint Cup season, Jimmie Johnson is quietly becoming a serious contender for what...

Jeff Gordon reveals whom he believes is best he's ever raced

In an exclusive interview with FOXSports.com, we asked Gordon to name the best racer he ever competed against. Gordon said several of them stood out. 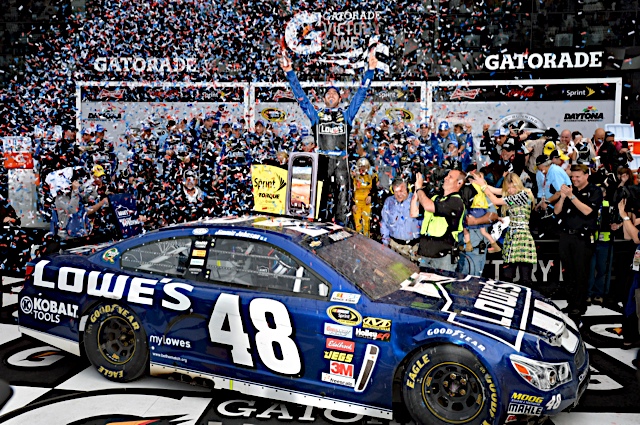 As Johnson looks to add another title to his growing collection, the campaign moves from Drive for Five to Six-Pack. It's going to be storyline A this...

The 2011 Sprint Cup Series is officially underway as has begun in Daytona Beach for the 53rd running of the Daytona 500. That means the six-pack is...

The 2011 Sprint Cup Series is officially underway as has begun in Daytona Beach for the 53rd running of the Daytona 500. That means the six-pack is...

In 2011, Johnson began the season with a fourth place finish in the Budweiser Shootout, after starting from the 23rd position.

The Jimmie Johnson Foundation was launched by Johnson and his wife Chandra in 2006. The foundation helps children, families, and communities in need. 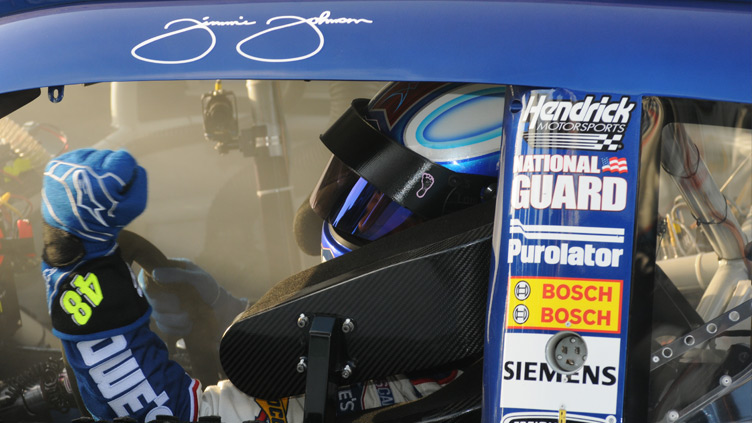 Johnson began racing full time in the Winston Cup Series during the 2002 season. During the season, he became the first rookie driver to lead the point standings, and the first rookie to win twice at the same track during a season. He recorded four pole positions and three wins.

Five-time NASCAR Sprint Cup Series champion Jimmie Johnson had a bit of a rocky start this season after a hefty penalty and early race wreck in the...

Johnson's road has been long -- but well worth wait

Johnson "Tooling Around" Busch Series in 2005

He grew up in a trailer park and he's bearing down on a record fourth consecutive Cup championship. So why do people think he's so vanilla?

Johnson a Champ On and Off Track

Ask around and people will tell you Jimmie Johnson is the real deal, whether it's on the track as a three-time Cup champion or off it as a longtime... 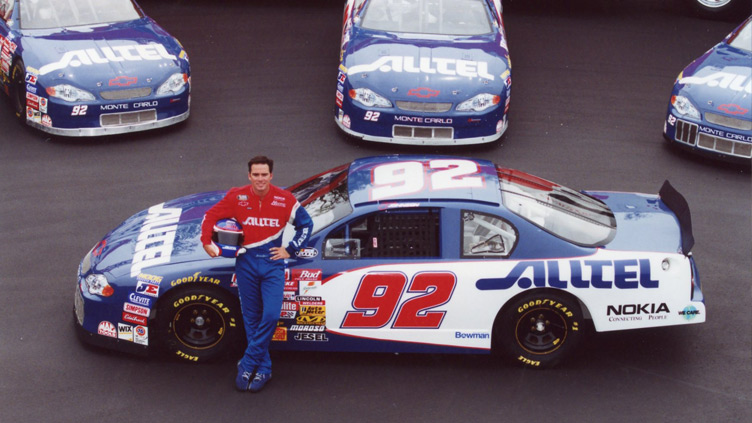 Don't blink - you might miss it! Vintage footage of current NASCAR superstar Jimmie Johnson during his pre-Sprint Cup days in one of the most vicious... 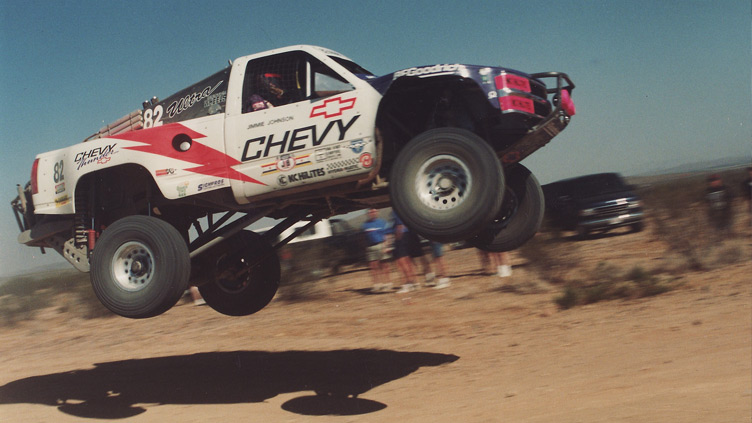 Johnson began racing full time in the Winston Cup Series during the 2002 season. During 2003, Johnson finished ninth on the all-time list for consecutive weeks ranked in the Top-10.

Jimmie Johnson - The Offroad Years and the "Laughlin Leap" 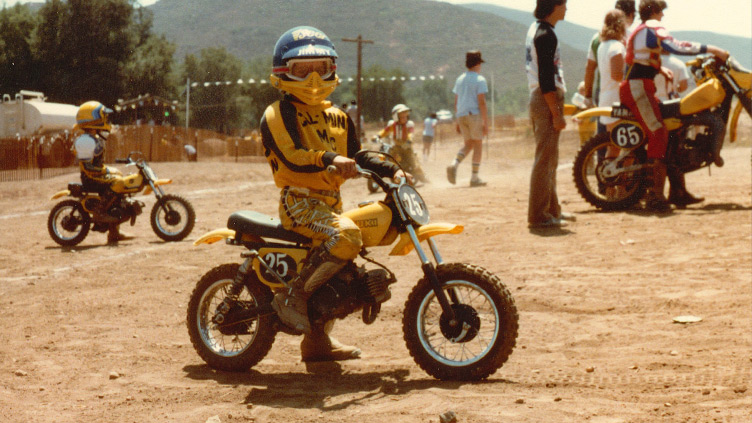 When Jimmie Johnson was seven, Rick Johnson attended one of his competitions and predicted a bright future for the pint-sized racer. During the race, Johnson approached a six-foot jump, sailed his bike 65 feet through the air and stuck the landing, though he later spun out into a crash. Rick Johnson was amazed watching Jimmie Johnson fearlessly attack the jump.

A knee injury never treated anybody so well. Jimmie Johnson, hurt in a motocross accident as an adolescent, attained the highest honor on four wheels in...

Jimmie getting his start in racing on two wheels 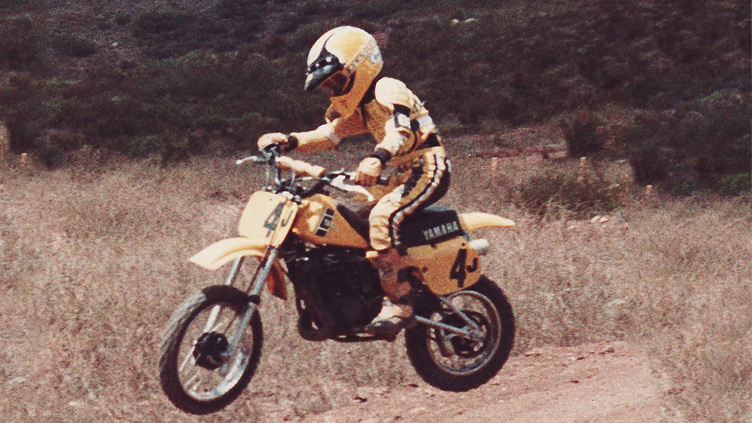 The oldest of three, Johnson was born on September 17, 1975, in the San Diego suburb of El Cajon, California. Johnson grew up in a blue-collar family. His mother, Cathy, drove a school bus and his father, Gary, operated heavy machinery. At the age of four, Johnson could handle a 50cc motorcycle. He was racing by age five and won his first championship at age eight, racing larger 60cc motorcycles.

Jimmie learned to ride a motocross bike at age 4

Jimmie talks about racing and growing up in California